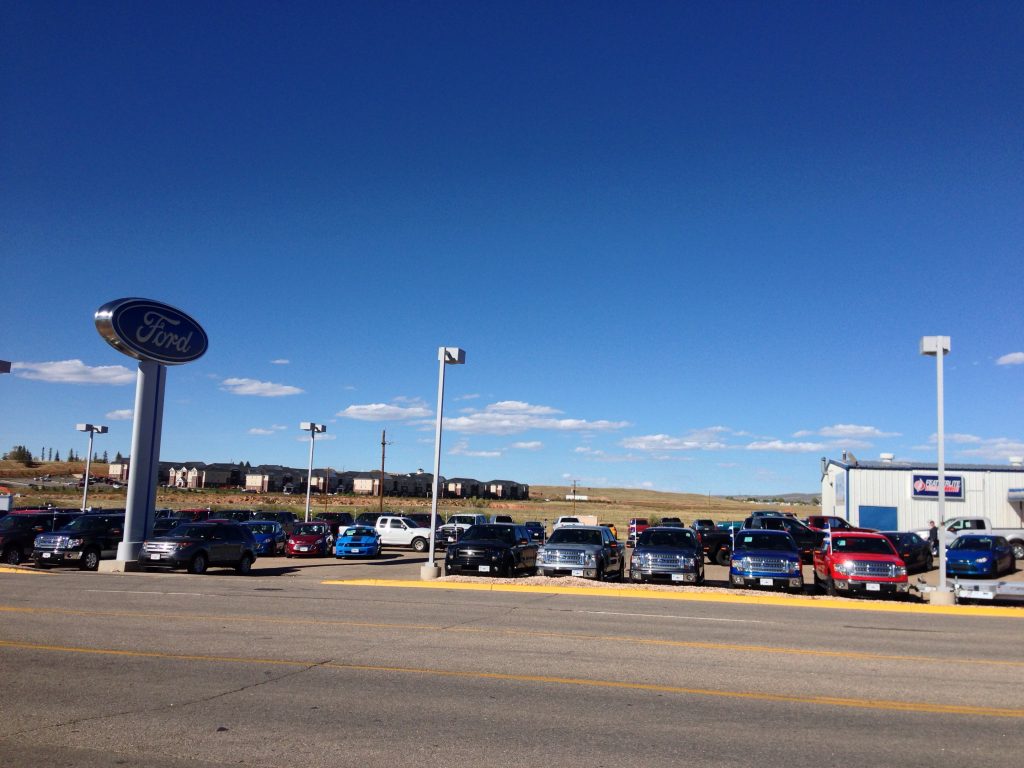 The sun sets behind an array of clouds over Medicine Bow-Routt National Forest near Laramie, Wy. (© 2014 Alan Murray/Uncharted)
I hovered around the Ford dealership that had held me hostage for almost a week. (©2014 Alan M. Murray/Uncharted)

Definitely don't go without a camera. I've never seen better sunsets. It gets cold at night so bring winter clothing. It was September and it snowed in downtown Laramie so imagine what it could get like in higher elevations.

Make more time than you think to see this place. I was sick for a couple days and my car broke down so I only ended up being able to spend a few hours there in the evening. There are all kinds of places I'm planning on exploring when I go back.

There is a demon in Wyoming. It lives somewhere between Cheyenne and Laramie. It broods in the air over Interstate Highway 80 around 8000 feet above sea level. They say all kinds of things happen to cars along that road. Steep mountainous terrain, freezing temperatures and fierce winds strain engines, exhaust fuel and oppose passage to more hospitable roads.

It was there, on a September day that threatened snow, in the place where cell phones go dark, just before Buford, population of one, that my car met that demon and died. I was almost halfway through my road trip across 19 states when my car lost power on a mountain pass. I crawled at 20 mph on the shoulder, my four-way flashers frantically blinking in distress, as traffic sped around me. I drove at this embarrassing pace for nearly half an hour when help arrived – at least that’s what I thought. Another car pulled off the road just ahead. My relief lasted but seconds as the driver shouted, “I just ran out of gas. Can you give me a lift to the next gas station?” I made room for another stranded motorist and we crawled further up the mountainside.

Two or three miles later we arrived at the only gas station in Buford. The station manager, accustomed to motorists in distress, wrote from memory the number for the nearest towing service. The tow truck came and I parted with my gas-searching hitchhiker. For over 20 miles as we headed toward Laramie, the driver recounted tales of the demise of other cars he had rescued on that stretch of highway – victims of breakdowns, accidents and severe weather. He talked of terrible whiteout conditions, snow, freezing temperatures and his narrow escapes from these menaces, reminding me that snow was in the weekend forecast.

It was Saturday. The dealership was closed. I was stuck in southeastern Wyoming for the weekend. My next stop was supposed to be Arches National Park in southern Utah, where I had planned to camp for a couple of days and work on some projects for Uncharted's exploration community. Instead, I rented a room and waited.

The following Monday I paced back and forth outside the dealership, anxiously awaiting the verdict and hoping for a simple fix. It was anything but simple – if it could be fixed at all. I wasn’t ready to give up. I had traveled almost 2000 miles and I wasn’t going to let this mechanical nightmare keep me cooped up in a stuffy hotel. I had to find some way of turning this frustrating situation into something good.

I rented a car and ventured into Medicine Bow National Forest just west of Laramie. The road climbed higher and higher until it turned to dirt. The weather was clear as the sun began its descent, creating canvases of spectacular cloud formations and patterns of light perfect for photography. Images of this scene are available at Uncharted’s new Etsy Shop, another way we bring our adventures (even the ones where things go wrong) into your home or office with prints and gallery wrapped canvases.

While admittedly I was in a frustrating situation, had my car not broken down, I would have hastily passed through Wyoming to my next destination without ever discovering the many spectacular scenes and unique stories it offers to those willing to get off the interstate and explore. The next day, with my car still on life support, I resolved to get back on schedule. Since by then the national parks were closed, I abandoned my plans for southern Utah and headed to my next stop near Salt Lake City.

My car and I parted ways. From Utah I took a rental back through Wyoming, to Colorado, through Kansas to Missouri, to Illinois, through Kentucky, to Tennessee, into the Carolinas, up to Virginia, then West Virginia, through Maryland and back home to Pennsylvania. My car went by some other route, hauled by a shipping service. The demon had one more trick to play. The truck hauling my car also broke down, delaying its return by a few days. It’s now on life support at the local shop. So, if you’re traveling across the country and venture through Wyoming, beware of the demon that lives between Cheyenne and Laramie, somewhere near Buford, population of one.

About Alan
I'm the CEO and founder of Uncharted. I love exploring the world's hidden places and am passionate about helping others do the same.
Hometown: Malvern, PA, United States
Languages: English (U.S.), Spanish, Portuguese, I'm teaching myself French. 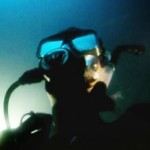 Definitely don't go without a camera. I've never seen better sunsets. It gets cold at night so bring winter clothing. It was September and it snowed in downtown Laramie so imagine what it could get like in higher elevations.

Make more time than you think to see this place. I was sick for a couple days and my car broke down so I only ended up being able to spend a few hours there in the evening. There are all kinds of places I'm planning on exploring when I go back.