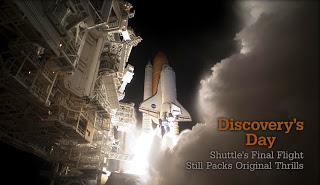 When I was a kid, my Aunt Betty Saltzgiver of Salt Lake City, who knew people who knew people who worked for Morton-Thiokol, the Utah contractor that built the solid rocket boosters and main fuel tank for the United States’ space shuttles, had them send me a bunch of photos of the shuttle, the rockets, and just about everything to do with the shuttle, including a little patch I had Mom sew onto my jacket.

I literally wore those photos out looking at them, poring over every detail, wondering what it would be like to be one of those astronauts flying up into space in that magnificent black-and-white bird.

One thing led to another, as life often does. I went on to a career in small-town journalism, followed by another career as a technical writer at a nuclear waste dump. But space always remained that final frontier.

Now Joseph Burkhead, Uncharted’s resident pilot, has taken me on a voyage to a shuttle launch — one of the few remaining launches before what’s left of the fleet is retired in 2012. Thanks, Joe. Read his story here.

And thanks, Aunt Betty. I’ve still got those photos somewhere.