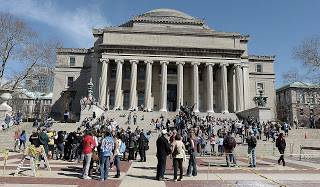 Eating lunch in the Low Memorial Library at New York’s Columbia University brings back fond memories. For instance, I remember when a spider bit an unsuspecting Peter Parker during a campus tour, transforming him into a wall-crawling superhero. Parker, now Spider-Man, would later become a student at Columbia University.And then there’s Weaver Hall, not far from the library, where three eccentric scientists were fired by the dean. The words echo, “You are a poor scientist, Dr. Venkman! And you have no place in this department, or this university.” Shortly after, back at Low Memorial Library, future Ghostbusters sat, just outside, mourning the death of the Department of Parapsychology.Of course, I didn’t see any spiders, there is no Weaver Hall (though I looked) and Columbia University really doesn’t have a Department of Parapsychology, but it’s fun to imagine over lunch.And there’s more to the Low Memorial Library than movie trivia. It’s also the place where the Pulitzer Prizes are awarded each year. It’s a place that inspires, where greatness has left its footprints––like Dr. Nicholas Murray Butler, former President of Columbia University. Butler once said, “Those people who think only of themselves are hopelessly uneducated. They are not educated no matter how instructed they may be.” I believe that and I think President Butler would be proud at how much Columbia University does think of others, no doubt, inspired in part by the legacy he left behind.

The Columbia Scholastic Press Association’s 86th annual Spring convention is a prime example of thinking of others. This week, over 300 guest speakers, professionals and publication advisors from around the country, converged on campus, volunteering their expertise for over 400 unique sessions over three days, anything from reporting and photography, to design and leadership, and much, much more.

And it’s not just workshops. This army of experts were on hand throughout the convention to offer critiques on newspapers, yearbooks, photography, and websites. They come at great expense of both time and money. Their passion for education is contagious. Truly, they fit President Butler’s definition of true education, for they think of others time and time again.

For me, it is an honor to participate, a chance for Uncharted to reach out and think of others and I look forward to each invitation. I always walk on campus thinking, “Mr. Murray, you have no place in this convention, or in this university.” Each time I teach I come back better than I arrived. I always learn from the students and advisors attending my session.

This time was no exception as I shared and discussed leadership principles and models that have been invaluable in the founding of Uncharted and its growing success. The students attending my session are leaders on their campus publications. They were eager to learn, their questions were informative, their comments genuine, and their enthusiasm sincere. They could relate with the challenges of leadership. And they gave this instructor a lot to think about on the flight home.