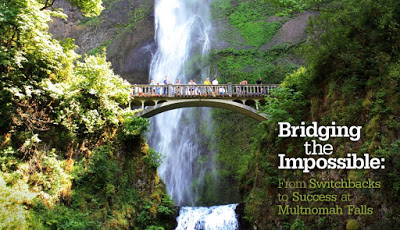 Nearly forty years ago, Neil Armstrong, Buzz Aldrin, and Michael Collins took those “small steps for men” and fulfilled what even a decade ago seemed an unsurmountable obstacle: Landing men on the moon and returning them safely to Earth. Getting the U.S. space program from the era of crashing Vanguard rockets through the tragedy of Apollo 1 to the glee of watching Walter Cronkite’s schoolboy anticipation and tearful joy at hearing Neil Armstrong’s words from the surface of the moon took thousands of men and women, countless millions of man-hours, billions of dollars and one rather enjoyable Ron Howard movie.

So maybe, in a small way, getting our family up the 1.2 mile trail from the base of Oregon’s Multnomah Falls to the deck at the falls’ top, represents our own small steps for men; our one giant leap for family togetherness.

It was not a simple jaunt. The trail may be just over a mile, but it climbs more than 600 feet in that distance, a pretty steep requirement for three little pairs of feet anxious to climb but not necessarily used to such exertion. But, as you’ll read in Uncharted.net’s update this week, those little feet made it to the top and then, well, we arrived at Tranquility Base.