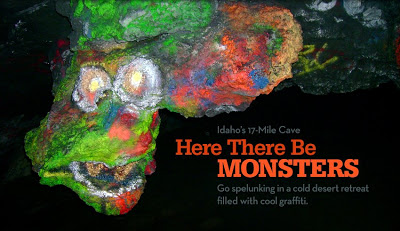 One of the things I enjoy the most about writing and taking photos for Uncharted is that I get to show off some of the wonderful places that make eastern Idaho such a fantastic place to explore. 17-Mile Cave is one of those places.

The cave is a mix of the ancient and modern. Ancient, because it’s a remnant of Idaho’s volcanic era, a time that saw volcanoes sprouting from the desert, great cracks opening in the Earth oozing lava and, of course, underwater rivers of lava forming caves and tubes under the upper crust, then draining, leaving a place for moderns like us to plow underground. And modern, because the cave is filled with graffiti, has a chamber large enough to host touch football games and is uncomplicated enough to allow amateur cave explorers a place to go without worrying about getting lost.

So, stop reading this and go on to read about 17-Mile Cave. Enjoy.